Organised by the Villèle Historical Museum, in partnership with the Departmental Archives of Reunion Island, this exhibition retraces the unique history of a slave called Furcy. 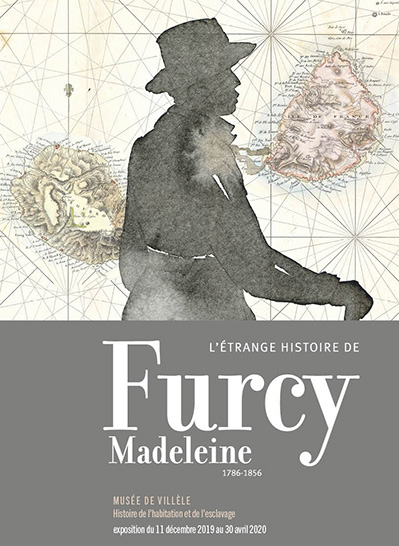 In 1817, on Bourbon Island (Reunion Island), thirty-one year old slave Furcy brought legal proceedings against his master Joseph Lory before the Saint-Denis District Court, contesting his status as a slave and claiming his ‘ingenuity,’ or rather his freedom of birth.

With the help of his free sister Constance Jean-Baptiste, Louis Gilbert-Boucher, public prosecutor at the Royal Court of Bourbon in 1817, and Jacques Sully-Brunet, a young lawyer and hearing officer at the Royal Court of Bourbon, Furcy embarked on a long fight against colonial justice that would lead him to imprisonment on Bourbon Island, exile in Mauritius as a slave, then freedom and legal proceedings in the highest courts of France.

Furcy’s fight was based on the following arguments: his mother was of Indian origin and not a Negress from Africa; having spent time in France, she should no longer have been a slave. Born after her stay in France, Furcy himself should therefore have been a free citizen at birth.

This trial lasted twenty-seven years, finally ending on December 23rd 1843 in the Royal Court of Paris with the following decision: “Furcy was born in a state of freedom and ingenuity”.

This exhibition is the culmination of research work carried out by anthropologist and historian Gilles Gérard, who wrote the script.
It is also based on the work of Sue Peabody, an American historian and academic, author of Madeleine’s Children: Family, Freedom, Secrets, and Lies in France’s Indian Ocean Colonies and of researcher Jérémy Boutier, author of a thesis entitled La question de l’assimilation politico-juridique de La Réunion à la métropole, 1815-1906 (Université d’Aix-Marseille) and of several articles on Furcy.

The challenges of this exhibition

The aim of the exhibition is to use all available sources to give an insight into the unique, prodigious and complex life of Furcy, even if it means re-establishing facts and breaking down a few preconceptions: he was in fact not a militant abolitionist, and would end up with his own slaves, living the rest of his life in relative opulence.

It also aims to place the strange story of Furcy in the context of the respective colonial societies of Bourbon Island and Mauritius and to put the spotlight on Furcy himself, correcting history’s often misconceived representations of him.

The visit covers the various events of his 27-year legal battle: abuse of power, forged documents, and pressure exerted on Furcy and his family…

Archival documents for each of the four sections of the exhibition are highlighted to support the historians’ arguments, and information boards for each room provide further information and facts.

Alongside this, there is a second section entitled ‘Furcy Today’, with screens showing interviews with the many artists who have addressed Furcy’s story in recent years.

Created by designer Sébastien Sailly, characters are shown as silhouettes throughout the different rooms, helping the visitor to identify all the protagonists of a plot which unfolded across India, Bourbon Island, Mauritius and France: these include Furcy, of which no physical representation is known to this day, his sister Constance, a free black woman, his mother Madeleine born in Chandernagor, Philippe Desbassayns de Richemont, son of Ombline Desbassayns, prosecutor Boucher, and finally Joseph Lory, Furcy’s master…

Characters, places, documents which have been lost and found, doctored papers: no stone has been left unturned in reveal this strange story to museum visitors.

Contemporary resonances of the Furcy case

In Reunion Island, Furcy’s story may have been revealed to us through the work of historian Hubert Gerbeau in 1990, but it wasn’t until Sophie Bazin and Johary Ravaloson (alias Arius and Mary Batiskaf) created Liberté Plastik back in 1998 that Furcy became a symbol of the fight for freedom.

The publication of Mohammed Aïssaoui’s book, L’affaire de l’esclave Furcy, (Prix Renaudot 2010), is another element to be taken into account to understand the appearance in the 2000s of the collective movement Libèr nout’ Furcy, (Free Our Furcy) and the emergence of various creations by artists from here and abroad: Hassane Kouyaté’s play L’affaire de l’esclave Furcy, Fer6 by Francky Lauret and Erick Isana, the draft of an animated film by Laurent Médéa, the song L’or de Furcy by musician Kaf Malbar, or the sculpture by Marco Ah Kiem at the Barachois in Saint-Denis.

From May 1998 to May 1999, Arius and Mary Batiskaf (whose real names are Sophie Bazin and Johary Ravaloson) toured around Reunion Island with a stage re-enactment of Furcy’s trial, with actors performing from within a cage, travelling around to perform in ten different venues. Conceived and written by Johary Ravaloson, around hundred actors helped to bring this trial to life.
150 years after the abolition of slavery, Furcy’s story painted the hero in a positive light, highlighting the various power struggles which were not always clear.

L’affaire de l’esclave Furcy is a historical essay by French writer and journalist Mohammed Aïssaoui, published in 2010 by Gallimard. The book has received numerous awards, including the 2010 Renaudot Prize for historical essays and the 2010 RFO Book Prize.
It was this fictionalised account by Mohammed Aïssaoui’s that first revealed Furcy’s story and his fight for freedom to the general public.

“Hassane K. Kouyaté describes the trial and the research carried out by journalist Mohammed Aïssaoui. As an actor, he plays in turn the many characters of this astonishing affair in a raw and compelling way”. (Jeune Afrique)

Hailing from the ‘Cow-Boy’ district of Le Chaudron (Saint-Denis, Reunion Island) Singer Kaf Malbar’s song pays tribute to Furcy’s battle. His popularity, particularly among young people, has helped to spread the story of Furcy across Reunion Island even further.

Novelist Francky Lauret creates a dialogue between Furcy and other slaves sharing his cell in the Juliette Dodu prison in Saint-Denis. Alone on stage, Érick Isana takes on the role of each of the characters.

The sculptor from Ilet Quinquina (commune of Sainte-Clotilde, Reunion Island), and creator of numerous works on the subject of slavery, celebrates the memory of Furcy with a sculpted ensemble piece, erected on the Barachois seafront of Saint-Denis (Reunion Island).

A Furcy collection in the Departmental Archives of Reunion Island

Historical research about Furcy has been notably furthered thanks to the purchase of the ‘Furcy Collection’ by the Departmental Council back in 2005. This collection is in fact the documents and papers of Louis Gilbert Boucher, Attorney General of the Royal Court of Bourbon, Furcy’s main supporter.