The origin of the slaves on Bourbon island

The island remained rather isolated, only sporadically visited by pirates

. who, based in Madagascar, would often bring small groups of slaves with them. To put a stop to their plundering, Louis XIV offered an amnesty to Bourbon, while at the same time prohibiting all trade with the pirates . Robert Bousquet states that 423 slaves baptised between 1696 and 1718, most of them brought in by pirates from Madagascar .

The history of the slave trade

The French slave trade in Bourbon did not really begin until the 1710s. First of all, coffee was introduced and then, in 1715,

the French recovered Mauritius, which had been abandoned by the Dutch for five years. In order to provide a workforce for the coffee plantations, a slave expedition was sent in 1718, resulting in the Courrier de Bourbon bringing in 46 Malagasy slaves .

The following year, the French East Indies Company was re-established, resulting in regular trade between Madagascar and the Mascarene Islands. Between 1725 and 1735, Robert Bousquet estimates that 4,123 Malagasy slaves were imported, which represents just over 400 per year, or two thirds of the total number of slaves introduced . Bourbon then received the majority of the slaves, until the arrival of La Bourdonnais.

Number of maritime expeditions from Madagascar to Bourbon (1721-1736)

From 1735 onwards, maritime activities were increasingly shifted to Isle de France (today Mauritius), and Bourbon’s role became secondary, subordinate to Port-Louis. Archived documents are scarce and there is little information concerning this period up to the 1760s. However, this did not mean that slaves were no longer going to Bourbon. On the contrary, the slave population was larger than in Isle de France and remained so until the beginning of the 19th century.
When the French East Indies Company went bankrupt in 1767, maritime trade across the Indian Ocean opened up to all French citizens. This resulted in a slave trade dominated by private merchants. Certainly, Port-Louis dominated maritime trade, and the non-existence of ‘arrival declarations’ for Saint-Denis or Saint-Paul further highlight this. For most of the 18th century, Bourbon Island (where very few merchants settled) was therefore dependent on Isle de France . However, 180 expeditions to Bourbon were recorded, most of which took place before 1735 or after 1767, half of them in the early 19th century . It should also be noted that the same number (and probably more) of these expeditions from Madagascar carried onwards to Port-Louis after having stopped off in Bourbon Island . 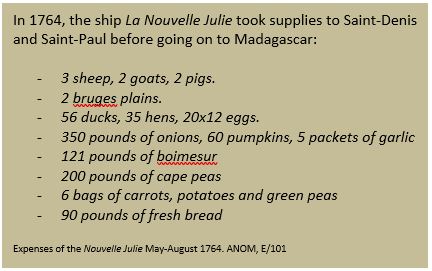 It is therefore possible that some slaves disembarked and others embarked. Like Baker and Corne, we find it very difficult to determine on which island the captives were landed, especially given the slave cabotage between Bourbon and Isle de France . It is also worth remembering Bourbon’s role as a place to replenish stocks on the way to Madagascar.

Number of maritime expeditions from Madagascar to Bourbon (1767-1810) 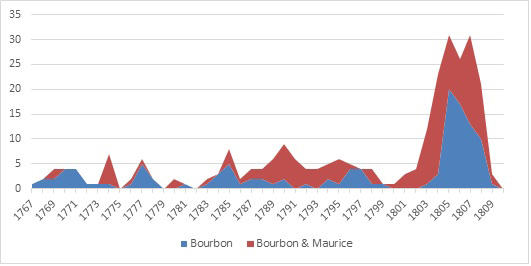 After the Revolution, the relationship with mainland France became somewhat fractured, especially in connection with the abolition of slavery by the National Assembly in 1794. The Mascarene Islands became almost independent, ruled by their respective colonial assemblies. 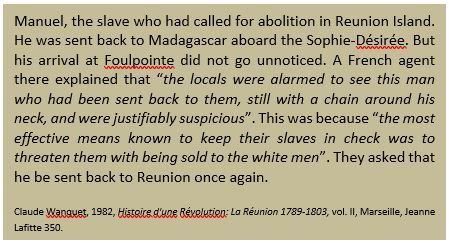 Even if slavery had not been not abolished, changes were felt. At the same time, the slave trade was abolished by decree of the Colonial Assembly on Isle de France  . This prohibition does not seem to always be respected, even if some were tried and found guilty of this. The slaves who disembarked by Martineau on board the Jean Bart were sent to Madagascar . However, many slaves were brought in, as in October 1796, when hundreds of Malagasy slaves were brought into Reunion illegally .

The first decade of the 19th century was marked by continued interactions with Madagascar. There were many important events such as renewed trade with France following the restoration of slavery by Bonaparte in 1802 and the arrival of Captain General Decaen in the Mascarene Islands the following year. The growing threat of privateers led to Bonaparte Island falling to the English in July 1810.

The specific features of the slave trade

For many reasons, the slave trade in Madagascar was very different to that in the Caribbean and East Africa. First of all, shipments to Madagascar not only brought back slaves, but also food.

Allen highlighted the variety of cargoes and Toussaint noted the importance of plant and animals too (341 and 181 loads respectively) . These merchant ships therefore carried slaves, cattle and rice, which limited the space reserved for slaves.

In fact, it’s important to take into account this variety of cargoes, which was the case for Madagascar and everywhere else across the Indian Ocean . And even if Bourbon was considered as the food store of the Mascarene Islands, it was never protected from famine due to locusts, cyclones and droughts . As a result, the islands found themselves in a state of continual famine and regular deliveries of food were essential to ward off famine . Madagascar’s role as a provider of rice and beef remained vital: each year, this represented several thousand oxen and hundreds of pounds of rice.

The authorities on Bourbon also organised and encouraged expeditions to obtain rice and oxen, particularly from the 1790s onwards . The colonial assembly of Reunion recruited an agent to supervise its commercial relations to compete with Isle de France . For example, it was recorded in 1794 that ship-owner Martineau sold the Jean Bart to a merchant called Dancla who wanted to send it to Madagascar to supply the island with rice and other commodities . It returned with 72 black slaves .

The table above demonstrates just how the slave trade in Madagascar was intertwined with the commerce of food in Reunion Island. 32 ships from Madagascar brought in at least 885 blacks, but also 29,716 bags and 890,000 pounds of rice. The number of slaves per expedition was therefore quite limited, with an average of 44 per expedition between 1807 and 1808. But ships varied greatly in their numbers: 79 slaves on the Union and 9 on Princess Charlotte. 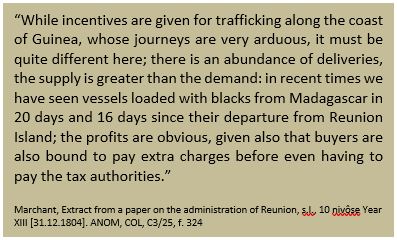 Another peculiarity of the slave trade in Madagascar was fraud. There are several reasons for this. Firstly, expeditions to Madagascar could be carried out quickly, which favoured illicit activity. On top of that, profits were considerable: a slave would be sold in Reunion with a 200% profit margin, and in one trip they could earn around 6,000 pounds  . In 1756, Magon explained that, of the 1,500 slaves brought to Isle de France over the previous three years, only 100 were landed legally – “the rest were smuggled in via the Company’s vessels, which for their part only carried a very small number of slaves, a few beasts & a little rice “.

Even though this infamous crossing was quick (just one to two weeks from Madagascar, compared to three to six months across the Atlantic), this did not mean reduced mortality rates. Over fifteen shipments, a mortality rate of rate of 8% was observed, compared to 12 to 15% for transatlantic slave ships . 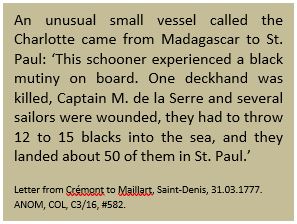 This rather high rate can be explained by the presence of malaria along the Malagasy coastline, which affected Malagasy slaves brought to the coast from further inland. On the other hand, their shared Malagasy language possibly increased the willingness of the Malagasy slaves on board to give armed resistance, with 24 recorded mutinies and a rate that could be double that of the transatlantic slave trade .

The last decade of the 18th century also saw the development of another phenomenon: the transit of East African captives via Madagascar to the Mascarene Islands . Before, slaves bought in Madagascar were practically all from the island itself. But numbers were not sufficient to satisfy the huge demand for slaves coming from the French in the Mascarene Islands. This is when Moorish Chelingues or Arabs from Kilwa and Zanzibar started to send ‘caffres’ off to the north-west coast of Madagascar: “they sold them to the natives who would make them work on the land”  ». These East African slaves were then sold to French merchants to be transported to the Mascarene Islands .
This number could have been very high, but it is still difficult to distinguish between Malagasy and ‘Mozambicans’ .

The situation in Bourbon

The number of slaves continued to increase until 1810. This population also rebelled against their colonial masters, giving rise to repeated escapes. 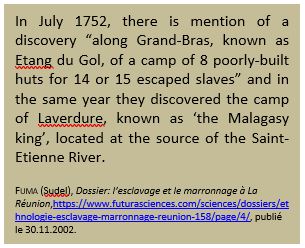 With its particularly mountainous interior, this was a particularly persistent problem in Bourbon . Resulting from this, some escaped slaves would organise ‘raids’ on plantations. Between 1732 and 1767, Bousquet counted more than forty raids on settlers’ dwellings  . Let us also not forget the Saint-Leu slave revolt in 1811, which involved 500 people and slaves, 15% of whom were Malagasy .

The Malagasy had a particularly bad reputation, and one which was not always 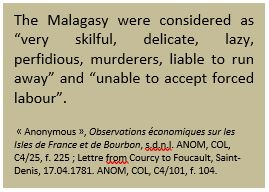 justified. At the end of the regime of the French East Indies Company, there were many Malagasy slaves in the Mascarene Islands: “they are a very poor race” and the risk of them escaping at sea was considered high  . The concern was that they would escape to Madagascar in dug-out canoes, their homeland “too close to home for them to desert definitively  ». These attempts failed in most cases, and every year canoes would arrive in Bourbon loaded with slaves who had escaped Isle de France, seeking to return to Madagascar .

But after Madagascar, between 1730 and 1770, East Africa started to rise in importance. As Wanquet points out, it is difficult to know the number of slaves brought in to Bourbon .

Prosper Eve notes that in 1735, three quarters of the slaves imported to Bourbon Island were Malagasy, and thirty years later, this number reached two thirds . In the 1809 census, Bourbon had 11,580 Malagasy slaves out of a total of 52,141 slaves, which is 22.2% . Did the slave trade then decline over time? No, but it is distinctly different from the ‘classic’ slave trade carried out along the east coast of Africa. However, with 1,771 slave shipments to the Mascarene Islands, the number of slaves traded, even if only a handful per ship, is likely to be very high.
It is difficult to give a precise figure for the number of Malagasy slaves who were brought to Bourbon Island during this period. It is believed that for the Mascarene Islands, the total number is between 137,289 and 201,864 slaves brought in from Madagascar. This number takes into account mortality rate (8%) and widespread fraud (estimated between 10 and 50%). It is likely that half of these slaves were destined for Bourbon Island, representing a number ranging from 68,645 to 100,932.

Trade relations with Madagascar were established since the colonisation of Bourbon by French settlers from Fort Dauphin. They began in 1648, but the French slave trade did not really begin until 1718 and lasted for a hundred years until 1810. It then continued illegally for a few decades . We have seen that the Malagasy slave trade in Bourbon was characterised by two elements. Firstly, the legal slave trade was strongly linked to the maritime activities of Isle de France, to the extent that both trades must be considered together. Secondly, the slave trade with Madagascar was unique in its variety of mixed cargoes: ships would transport both food and slaves.

1 Where did the slaves on Bourbon island come from ?

Next part
The slave trade in the Indian Ocean